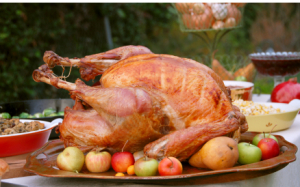 For the past two weeks I’ve been thinking about the best way to eat a turkey.  And to be honest, I much prefer eating leftover breast meat, cranberry sauce, and stuffing positioned between two pieces of bread. I mean, I love the aesthetics of a well bronzed bird placed in the center of the table for the holiday; But with the wild competition between delicious sides, the turkey is sometimes the last thing I put on my plate–sometimes left to the far rim of the season’s china.

Now, I’ve had turkey prepared every way I can think short of processed through a rotary evaporator. I’ve had it smoked, brined, fried, and dry rubbed. I’ve had it roasted, spit roasted, pickled, and poached. Well, maybe not pickled and poached. The truth is: there are a lot of ways to cook a turkey, and everyone has a BEST WAY TO COOK A TURKEY. If you cooked a turkey every day for two years, you still wouldn’t get through all of the recipes on the internet. That’s how many people think they know how to cook a turkey well.

So, this Thanksgiving I’m going to do something outrageous. I’m NOT going to tell you how to cook a turkey. I will, however, tell you how to IMPROVE your turkey with a few simple and easy techniques.

1. BRINING (as defined by Wikipedia)

brining is a process similar to marination in which meat is soaked in brine before cooking.

Brining makes cooked meat moister by hydrating the cells of its muscle tissue before cooking, via the process of osmosis and by allowing the cells to hold on to the water while they are cooked, via the process of denaturation. The brine surrounding the cells has a higher concentration of salt than the fluid within the cells, but the cell fluid has a higher concentration of other solutes. This leads salt ions to diffuse into the cell, whilst the solutes in the cells cannot diffuse through the cell membranes into the brine. The increased salinity of the cell fluid causes the cell to absorb water from the brine via osmosis. The salt introduced into the cell also denatures its proteins. The proteins coagulate, forming a matrix that traps water molecules and holds them during cooking. This prevents the meat from dehydrating.

In short, brining allows you extra flexibility when cooking your bird. That being said, there is no saving an over cooked bird. Which leads to the second technique.

2. CARRY OVER COOKING (also as defined by Wikepedia)

Carry over cooking refers to the phenomenon that food retains heat and continues to cook even after being removed from the source of heat. The larger and denser the object being heated the greater the amount of carry over cooking. After being removed from the heat source (oven, barbecue, grill, etc.) the internal temperature can continue to increase. This means that when cooking large roasts or turkeys, for instance, the roast meat should be rested before serving to allow heat to distribute from the warmer outside to the cooler middle, also allowing juices to distribute throughout the meat.

A turkey will continue to cook for at least 10 minutes AFTER being removed from the oven. So let it rest! Letting your bird rest before cutting into it can and will increase the amount of moisture trapped within it. How sad it is to see a beautiful bird leaking its fluids all over the counter top…

Lastly, a more compact bird is a more beautiful bird.

Trussing a bird refers to the method of keeping a turkey compact by tying it up with string. I have never been able to adequately explain this method without some confusion. So, I recommend searching for a video on you tube.

By keeping your bird compact, the turkey will cook more evenly AND look more beautiful when set upon your table. Even if it isn’t your favorite way to enjoy this festive treat, at least your guests will.