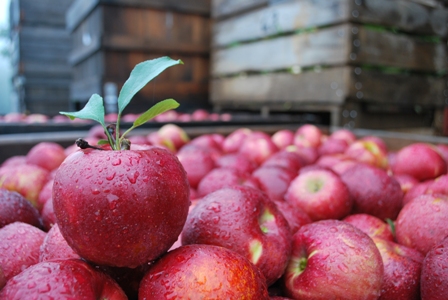 The Winesap is, indeed, a well-established apple.  It was first cultivated in New Jersey before the Revolutionary War and became popular in Southern states because it adapted well to humid summers.

The Stayman’s development is comparatively recent, but still goes back nearly 150 years, to Joseph Stayman who cultivated this apple in Kansas in the late 1860s.   The big, sweet, orange-toned apple never caught on much, though it is still around today.  Its flavors just needed a little something extra, and found that something extra by accident!

Nine years after Joseph Stayman first purposefully planted his Stayman trees, a chance seedling developed that crossed the two apples.  Bigger and sweeter than the Winesap, and with a darker tone and crisper texture than the Stayman, it truly took on the best of both apples.  Not only was the Stayman-Winesap exceptionally crisp and juicy with an appealing blend of sweet and tart flavors, but it could also keep for months, even before the days of electricity and refrigeration!

Slowly, over the next 20 years, the Stayman-Winesap became available to apple growers.

Though the Stayman-Winesap developed in Kansas, it is also ideally suited for growing conditions in the Delaware Valley.  The Stayman-Winesap flourishes in areas with fairly cold winters, fairly hot summers, and high humidity.  Do those weather conditions sound familiar?  This is not the climate of Washington state or New York state, even though these states are the two titans of apple production, but it is the exact climate of Southeastern Pennsylvania and the Delaware Valley.

Because of this, apple-lovers throughout our region are fiercely devoted to the Stayman-Winesap, but nationally, it isn’t a well-known apple, and it can be hard to find in grocery stores.

The Stayman-Winesap’s roots are strongly planted at Wolff’s Apple House.  In 1908, just 13 years after this variety became available to apple growers, Frank Wolff was planting the very first apple trees in the orchard that would become Wolff’s Apple House.

Frank heard about this then “new” apple and tried it.  He immediately fell in love with it! He planted many, many Stayman-Winesap trees in his fledgling apple orchard.  Wolff’s Apple House always grew more Stayman-Winesap apples than any other variety.

This apple that started from a chance seedling in 1875 has grown into a very popular local apple, and at Wolff’s, it is a customer favorite by far (2014 update: in recent years, it has been just barely eclipsed by the Honeycrisp).  It is truly a local favorite, and has been for over a century!