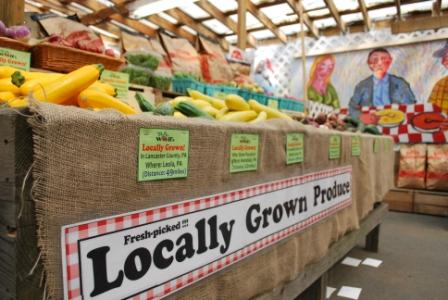 Did you know Pennsylvania produce has its own month?  At Wolff’s Apple House every month is a month to celebrate produce, but in August it’s official!  This year is the sixth year running that the Commonwealth has designated August as Pennsylvania Produce Month.

It makes sense—the quality and availability of locally grown produce is at its absolute peak throughout the month of August.  Almost all the Pennsylvania produce our customers enjoy throughout the year is in season in August. (The only things you won’t find are the early spring and late fall crops.)  Our bins are now bursting with tomatoes, basil, sweet corn and early apple varieties like Summer Rambo, Early Gold, Early Mac & Paula Red.  Pears, plums, watermelon and a whole host of other fresh summer delicacies are fresh locally and available now in our store.

Look for the many signs like this that will guide you to our local produce: 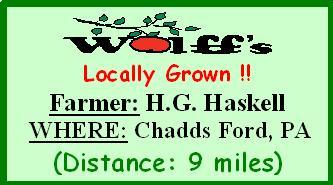 Many of the farmers who grow the in-season produce you’ll find at Wolff’s cultivate farms within 50 miles of the store.  We are close to prime farmland not only in Pennsylvania—where farmers grow over 200,000 tons of vegetables—but also in New Jersey, Delaware and Maryland.

Come celebrate the peak of the local produce season with Wolff’s Apple House!